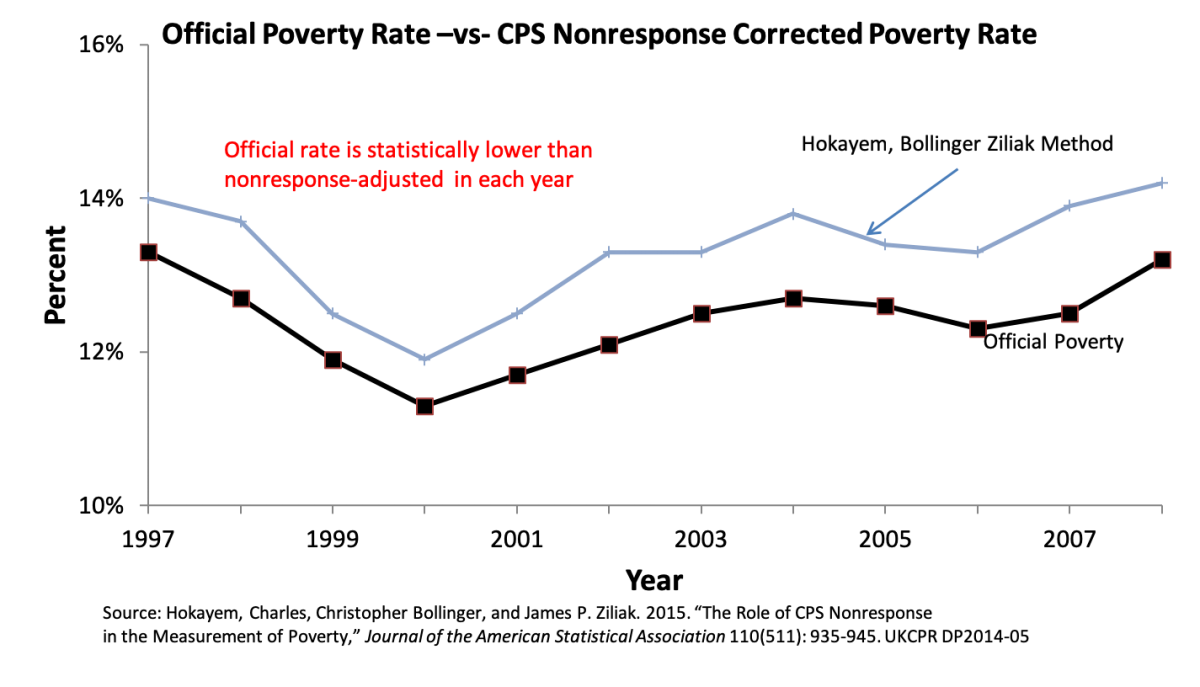 Measuring the economic status of low-income individuals and families is a central focus of poverty scholars and is at the fore of much public policy debate. The stakes are substantial as changes in poverty (and poverty thresholds) influence the scale and scope of redistributive tax and transfer programs at all levels of government. In the United States, official poverty statistics are derived from the Annual Social and Economic Supplement to the Current Population Survey, a nationally representative survey of about 90,000 households. The main source of household income comes from labor-market earnings, but as highlighted in the work of UKCPR Affiliates Charles Hokeyem, Christopher Bollinger, and James Ziliak (DP2014-05), published in the Journal of the American Statistical Association, a challenge to the proper measurement of income is survey non-response. Using a restricted-access dataset that links the CPS ASEC to Social Security's Detailed Earnings Records, they show that survey non-response is not random and leads to a systematic downward bias in the official poverty rate of about 10% in an average year. Follow-up research that is forthcoming in 2019 at the Journal of Political Economy (DP2015-02), and conducted jointly with Barry Hirsch at Georgia State University, shows that earnings non-response affects broader measures of the income distribution, such as earnings inequality and gender wage gaps.

We examine trends in employment, earnings, and incomes over the last two decades in the United States, and how the safety net has responded to changing fortunes, including the shutdown of the economy in response to the Covid-19 Pandemic. The U.S. safety net is a patchwork of different programs providing in-kind as well as cash benefits and had many holes prior to the Pandemic. In addition, few of the programs are designed explicitly as automatic stabilizers. We show that the safety net response to employment losses in the Covid-19 Pandemic largely consists only of increased support from unemployment insurance and food assistance programs, an inadequate response compared to the magnitude of the downturn. We discuss options to reform social assistance in America to provide more robust income floors in times of economic downturns.

Relative poverty in Great Britain and the United States, 1979-2017

This article examines the major changes to the face of poverty in Britain over the past few decades, assessing the role of policy, and compares and contrasts this with the patterns seen in the United States, using harmonized household survey data. There are various commonalities between the countries, including a shift in the composition of those in poverty toward working-age households without children, who have not been the focus of policy attention. There are also big differences, with a steadily increasing share of poverty in Britain – but a stable share in the US - found in households with an adult in paid work. This perhaps explains why the anti-poverty focus in Britain is now squarely on the plight of working households, while in the US it is focused on labor force participation among the low skilled – even though, as we show, the US has for decades been used to in-work poverty comprising a significantly higher proportion of overall poverty than in Britain.

The antipoverty impact of the EITC: New estimates from survey and administrative tax records

This version of DP2019-01 is a June 2020 update. Evaluations of the EITC, including its antipoverty effectiveness, are based on simulated EITC benefits using either the Census Bureau’s tax module or from external tax simulators such as the National Bureau of Economic Research’s TAXSIM or Jon Bakija’s model. Each simulator utilizes model-based assumptions on who is and who is not eligible for the EITC, and conditional on eligibility, assumes that participation is 100 percent. However, recent evidence suggests that take-up of the EITC is considerably less than 100 percent, and thus claims regarding the impact of the program on measures of poverty may be overstated. We use data from the Current Population Survey Annual Social and Economic Supplement (CPS ASEC) linked to IRS tax data on the EITC to compare the distribution of EITC benefits from three tax simulation modules to administrative tax records. We find that significantly more actual EITC payments flow to childless tax units than predicted by the tax simulators, and to those whose family income places then well above official poverty thresholds. However, actual EITC payments appear to be target efficient at the individual tax unit level, whether correctly paid or not. We then compare the antipoverty impact of the EITC across the survey and administrative tax measures of EITC benefits. In 2016, about 3.1 million persons were lifted out of poverty by the EITC, substantially less than prior estimates. Further analysis reveals that the efficacy of the survey tax simulators holds across the entire low-income distribution, and not just at the threshold delineating poverty status. Because these results are contingent on dropping CPS ASEC observations with imputed earnings and incomes, our recommendation is that users of the CPS ASEC drop observations with imputed earnings and at a minimum reweight the sample when conducting distributional research.

Economic change and the social safety net: Are rural Americans still behind?

This aim of this paper is to assess the economic status of rural people five decades after publication of President Johnson's National Commission on Rural Poverty report The People Left Behind. Using data from the Annual Social and Economic Supplement of the CPS, along with county data from the Regional Economic Information System, I focus on how changes in employment, wages, and the social safety net have influenced the evolution of poverty and inequality in rural and urban places. The evidence shows that large numbers of rural Americans are disengaged from the labor market, gains in human capital attainment have stagnated, and the retreat from marriage continues for the medium- and less-skilled individuals. However, the social safety net has been more effective in redistributing income within rural areas than in urban centers. Work, education, and marriage are the three main pathways out of poverty for most Americans, whether residing in urban or rural locales, and thus making progress against poverty and inequality faces major economic and demographic headwinds.

The changing safety net for low income parents and their children: Structural or cyclical changes in income support policy?

Refundable tax credits and food assistance are the largest transfer programs available to able-bodied working poor and near-poor families in the United States, and simultaneous participation in these programs has more than doubled since the early 2000s. To understand this growth, we construct a series of two-year panels from the 1981–2013 waves of the Current Population Survey Annual Social and Economic Supplement to estimate the effect of state labor-market conditions, federal and state transfer program policy choices, and household demographics governing joint participation in food and refundable tax credit programs. Overall, changing policy drives much of the increase in the simultaneous, biennial use of food assistance and refundable tax credits. This stands in stark contrast from the factors accounting for the growth in food assistance alone, where cyclical and structural labor market factors account for at least one-half of the growth, and demographics play a more prominent role. Moreover, since 2000, the business cycle factors as the leading determinant in biennial participation decisions in food programs and refundable tax credits, suggesting a recent strengthening in the relationship between economic conditions and transfer programs.

The aim of this paper is to assess the adequacy of the data infrastructure in the United States to meet future research and policy evaluation needs as it pertains to income, program participation, poverty, and financial vulnerability. I first discuss some major research themes that are likely to dominate policy and scientific discussions in the coming decade. This list includes research on the long-term consequences of income inequality and mobility, issues of transfer-program participation and intergenerational dependence, challenges with poverty measurement and poverty persistence, and material deprivation. I then summarize what information we currently collect in the U.S. that is used to address these issues, with particular focus on ten national panel datasets that cover these domains and continue to be fielded by the various federal agencies. Included in this section is a discussion of challenges posed by rising income nonresponse and underreporting in many panel surveys. I then conclude with a discussion of how the current panel surveys can be improved to address growing need for social science research on inequality, poverty, and material well being.

The Current Population Survey Annual Social and Economic Supplement (ASEC) serves as the data source for official income, poverty, and inequality statistics in the United States. There is a concern that the rise in nonresponse to earnings questions could deteriorate data quality and distort estimates of these important metrics. We use a dataset of internal ASEC records matched to Social Security Detailed Earnings Records (DER) to study the impact of earnings nonresponse on estimates of poverty from 1997-2008. Our analysis does not treat the administrative data as the “truth”; instead, we rely on information from both administrative and survey data. We compare a “full response” poverty rate that assumes all ASEC respondents provided earnings data to the official poverty rate to gauge the nonresponse bias. On average, we find the nonresponse bias is about 1.0 percentage point.

The effect of SNAP on poverty

The SNAP program cost one half of one percent, according to a 2013 estimate by Robert Moffitt. For that amount we get a 16 percent reduction in poverty (8 million fewer poor people) after an adjustment for underreporting, based on USDA Administrative data. Moreover we get a 41 percent cut in the poverty gap, which measures the depth of poverty and a 54 percent decline in the severity of poverty, when we add SNAP benefits to Census money incomes and recalculate the official poverty rate.

Appalachian legacy: Economic opportunity after the War on Poverty

In 1964, President Lyndon Johnson went to Kentucky’s Martin County to declare war on poverty. The following year he signed the Appalachian Regional Development Act, creating a state-federal partnership to improve the region’s economic prospects through better job opportunities, greater human capital, and enhanced transportation. As the focal point of domestic antipoverty efforts, Appalachia took on special symbolic as well as economic importance. Nearly half a century later, what are the results? Appalachian Legacy provides the answers. Led by James P. Ziliak, prominent economists and demographers map out the region’s current status. They explore important questions such as: How has Appalachia fared since the signing of ARDA in 1965, and how does it now compare to the nation as a whole in key categories such as education, employment, and health. Was ARDA an effective place-based policy for ameliorating hardship in a troubled region, or is Appalachia still mired in a poverty trap? And what lessons can we draw from the Appalachian experience? In addition to providing important research to help analysts, policymakers, scholars, and regional experts discern what works in fighting poverty, Appalachian Legacy is an important contribution to the economic history of the eastern United States. (Published at Brookings Institution Press, 2012)

Is there more to food inescurity among children than poverty? The importance of measurement