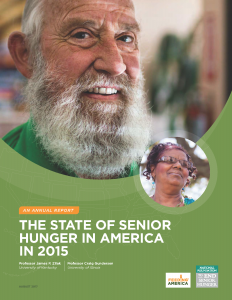 James Ziliak's work on senior hunger, co-authored with University of Illinois Prof. Craig Gundersen, was featured in the Washington Post on Aug. 17, 2017.  The Post article in Peter Whoriskey's Wonkblog  discusses recent trends in food insecurity for people over 60. The 2015 annual report by Ziliak and Gundersen, prepared for Feeding America and the National Foundation to End Senior Hunger, finds that rates of food insecurity have remained persistently high following the Great Recession, and that the recovery's effects seem to be the weakest for older Americans.  "There was no significant decline in seniors facing hunger," said Ziliak.  "This rate has been stubbornly stuck." Additionally, the authors included a supplement to the annual report that provides an overview of the extent and distribution of senior hunger.

Ziliak and Gundersen also authored a supplemental August 2017 senior health report titled The health consequences of senior hunger in the United States: Evidence from the 1994-2014 NHANES, which finds that food insecure seniors have lower nutrient intake and worse health outcomes,