Effects of welfare reform on household food insecurity across generations

This study estimated the effects of welfare reform in the 1990s, which permanently restructured and contracted the cash assistance system in the U.S., on food insecurity—a fundamental form of hardship—of the next generation of young adults. An implicit goal underlying welfare reform was the disruption of an assumed intergenerational transmission of disadvantage; however, little is known about the effects of welfare reform on the well-being of the next generation. Using intergenerational data from the Panel Study of Income Dynamics and a variation on a difference in differences framework, this study exploits 3 key sources of variation in childhood exposure to welfare reform: (1) Risk of exposure across birth cohorts. (2) Variation of exposure within cohorts because different states implemented welfare reform in different years. (3) Variation between individuals with the same exposure who were more likely and less likely to rely on welfare. We found that longer exposure to welfare reform led to decreases in food insecurity of the next generation of households, by about 10% for a 5-year increase in exposure, with stronger effects for women, individuals exposed at least 13 years, individuals exposed at relatively young ages (0-5 years), and individuals whose mothers were not high school dropouts. We found no evidence that Supplemental Nutritional Assistance Program benefits explained any of the observed effects. 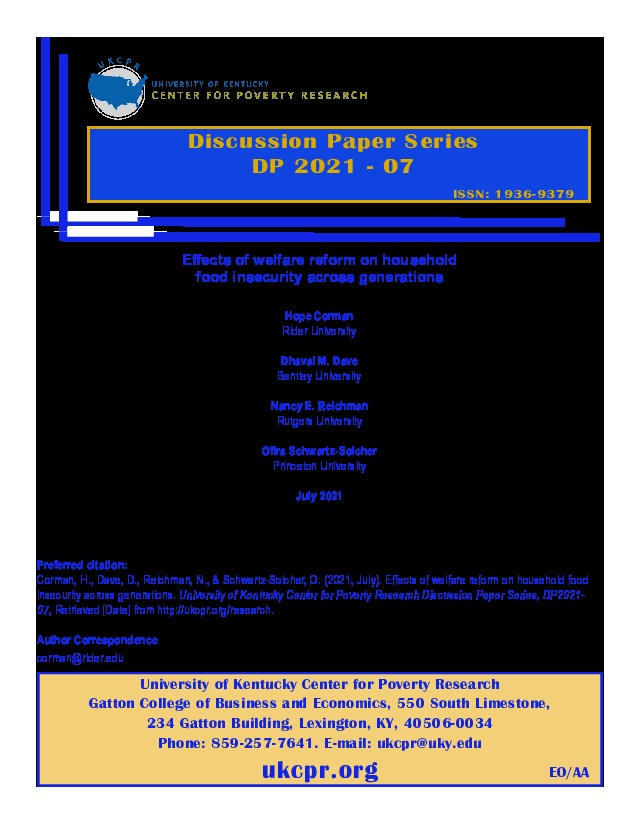