Food insecurity, a condition of limited access to nutritious food, is a critical issue for college students’ health and well-being. In this report, we present results from our project that examines the long-term effects of college students’ food insecurity on future socioeconomic status, wealth, and food insecurity using nationally representative data from the Panel Study of Income Dynamics. Our study population included 1,574 individuals who were enrolled in college between 1999-2003, aged 16-29 years old during college enrollment, and remained in the sample through 2015-17. We examined the associations of interest using a combination of linear, logistic, multinomial logistic, and fixed-effects regression models, adjusting for sociodemographic characteristics measured concurrent with college enrollment or during childhood. In the sample, the prevalence of food insecurity during college was 14.9%. College food insecurity was associated with lower odds of college completion and lower likelihood of obtaining a Bachelor’s degree or a graduate or professional degree. These associations were more pronounced among first-generation college students. College food insecurity was also associated with lower mean labor wage income and lower wealth accumulation (including home equity) across subsequent survey waves between 2005-2019. Finally, college food insecurity was associated with a higher prevalence of food insecurity in the later adult years (measured in 2015-17). Results suggest that college food insecurity has long-term implications for socioeconomic outcomes in adulthood. Future research should focus on the role of programs and policies that can break the cycle of chronic food insecurity and poverty over the life course. 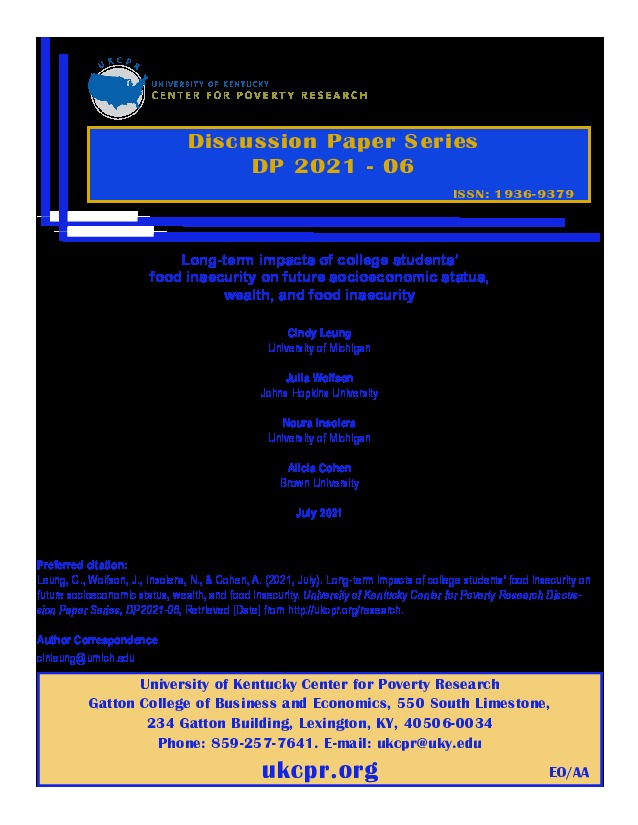