The health consequences of senior hunger in the United States: Evidence from the 1999-2010 NHANES

Food insecure seniors have lower nutrient intakes. For each of the eleven nutrients, average intakes are statistically significantly lower generally by 10-20 percent for food insecure seniors in comparison to food secure seniors. After controlling for other confounding factors, the effect of food insecurity is still negative for each of the nutrients albeit in some of the cases, the effect is statistically insignificant. These differences in health outcomes held across time. Food insecure seniors have worse health outcomes. For a wide array of health outcomes, food insecure seniors are worse-off than food secure seniors. Namely, they are 50 percent more likely to be diabetic, twice as likely to report fair or poor general health, three times more likely to suffer from depression, 30 percent more likely to report at least one ADL limitation, 14 percent more likely to have high blood pressure, nearly 60 percent more likely to have congestive heart failure or experienced a heart attack, and twice as likely to report having gum disease or have asthma. These differences were present in both the aggregate and for each four-year time period we examined. And, with the exception of gum disease, these worse outcomes hold even after controlling for other factors, though attenuated in magnitude. The effect of food insecurity holds even for a lower-income sample. As shown in Ziliak and Gundersen (2013), food insecurity rates are substantially higher for those with incomes less than 200% of the poverty line. So, we investigated whether or not the negative association of food insecurity with nutrient intakes and health remain even when we limit our multivariate analyses to those with incomes below 200% of the poverty line. We find that, in the main, the substantive and statistical significance of the results are quite similar to those for the full sample. This further demonstrates the importance of looking at food insecurity as an independent predictor of negative health and nutrition outcomes, even among lower-income seniors. 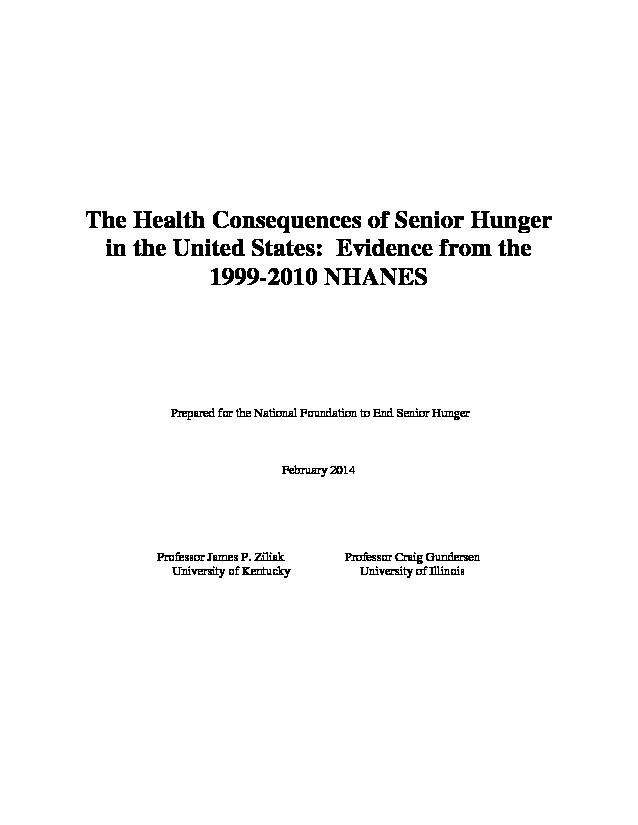 The health consequences of senior hunger in the United States: Evidence from the 1999-2010 NHANES