The state of senior hunger in America 2012: An annual report

In this report we provide an overview of the extent and distribution of food insecurity in 2012 among seniors, along with trends over the past decade using national and state-level data from the December Supplements to the Current Population Survey (CPS). Based on the full set of 18 questions in the Core Food Security Module (CFSM), the module used by the USDA to establish the official food insecurity rates of households in the United States, our emphasis here is on quantifying the senior population facing the threat of hunger (i.e. marginally food insecure). A supplement to this report also presents evidence on seniors at risk of hunger (i.e. food insecure) and on seniors facing hunger (i.e. very low food secure). This report demonstrates that seniors in 2012 continued to face increasing challenges meeting food need. Specifically, we find that

• 15.3% of seniors face the threat of hunger. This translates into 9.3 million seniors.

• Those living in states in the South and Southwest, those who are racial or ethnic minorities, those with lower incomes, and those who are younger (ages 60-69) are most likely to be threatened by hunger

.      • Out of those seniors who face the threat of hunger, the majority have incomes above the poverty line and are white.

• From 2001 to 2012, the fraction of seniors experiencing the threat of hunger increased by 44%. The number of seniors rose by 98% which also reflects the growing population of seniors.

• Since the onset of the recession in 2007 until 2012, the number of seniors experiencing the threat of hunger has increased by 49%. 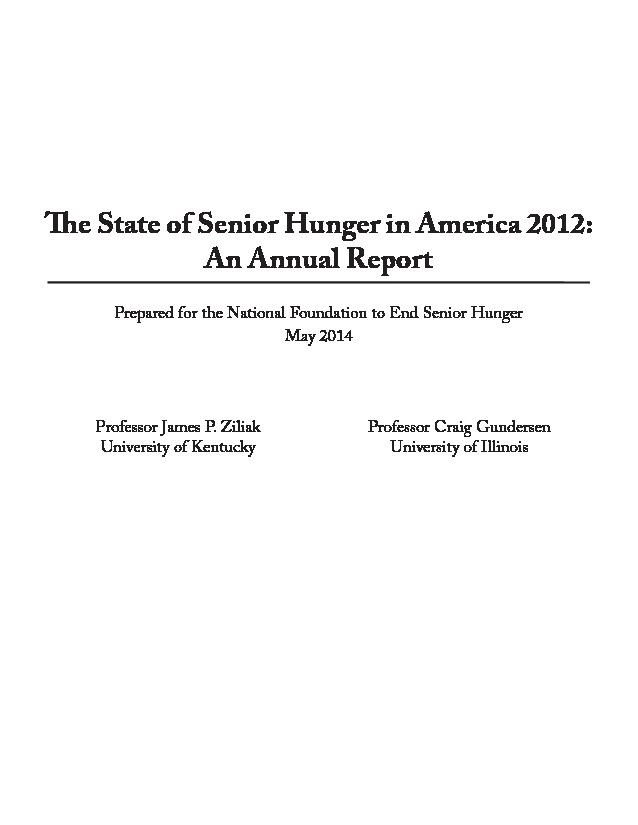 The state of senior hunger in America 2012: An annual report